Police investigate the scene where five young children were struck by a truck in Yachimata, Chiba Prefecture, on June 28. Two children died in the accident and three others were injured. (Video by Takahiro Kumakura) 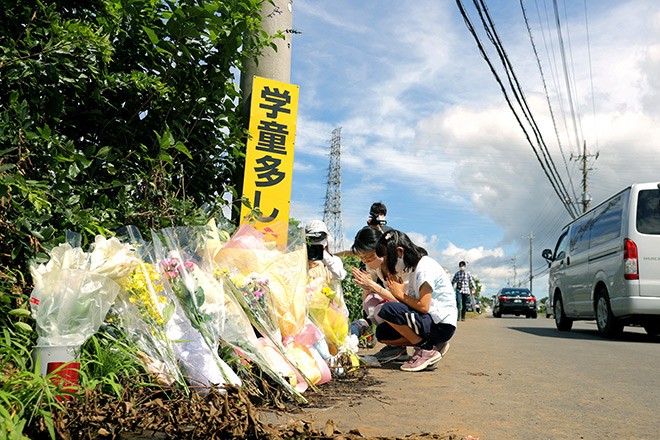 Mourners on June 29 visit an accident site in Yachimata, Chiba Prefecture, to offer flowers and prayers to the children killed and injured. (Wataru Sekita)

Shocked and angered parents and residents are demanding action to ensure road safety for children following the deaths of two young students who were struck by a drunk driver in a school zone in Chiba Prefecture.

Hiroshi Umezawa, 60, a truck driver, was driving through Yachimata, Chiba Prefecture, when his 7-ton vehicle hit a group of five children on their way home from nearby Choyo Elementary School at around 3:25 p.m. on June 28.

Yuto Tanii, 8, and Kaito Kawasome, 7, died in the accident.

An 8-year-old girl is in critical condition, while two other boys, 7 and 6, were seriously injured.

Chiba prefectural police arrested Umezawa on the spot on suspicion of violating the law of Punishment of Acts Inflicting Death and Injury on Others by Driving a Motor Vehicle.

On June 30, police sent him to the Chiba District Public Prosecutors Office on suspicion of dangerous driving resulting in death and injury.

Umezawa was headed back to his company’s office, not far from the accident site, and he told investigators that he had a drink along the way, police said.

Police believe Umezawa was under the influence and could not operate his truck normally and decided to apply the charge, which carries a much more severe statutory penalty.

Umezawa likely consumed alcohol a few hours before the accident. He told police that “a person came running out” from the side of the road and he swerved to the left to avoid a collision and hit a power pole, investigative sources said.

But police did not find evidence that backs up Umezawa’s statement. Instead, a security camera nearby captured Umezawa’s truck slowly veering left and hitting a power pole.

Since the tragedy occurred, the five children’s classmates and their parents, as well as neighbors, have visited the accident site one after another.

A 53-year-old man whose child attends the school came to offer flowers.

Many did not hide their anger at the suspect.

“Drunk driving is bad. If you drink, do not drive!” said an 80-year-old woman who lives near Kaito's home.

She said she often saw Kaito playing cheerfully and walking his dog.

“I am deeply sorry for his parents,” she said.

A 31-year-old man whose son is in the same class with one of the victims said with indignation, “I can’t still believe that (the classmate) died. This is unforgivable.”

Chiba Governor Toshihito Kumagai told reporters on June 29 that the prefectural education board will conduct an emergency inspection of school zones.

The accident has also strongly affected education officials of Yachimata, who have recognized the area surrounding the accident site as a dangerous school zone and sought to strengthen safety measures.

The central government ordered local governments to conduct a safety inspection of school zones and implement thorough measures in 2012, after a vehicle hit children walking to their school in a group and killed two of the students in Kameoka, Kyoto Prefecture.

The education board of Yachimata inspected school zones for 13 elementary and junior high schools back then. In March 2016, the city established a school zone traffic safety program, identifying unsafe locations and taking requests from residents such as for installing traffic signals.

The June 28 accident site has been identified as an unsafe location, city officials said.

The road is about seven meters wide, difficult for large vehicles to pass through at the same time and there is no guardrail.

Neighbors have long urged the city to do something to make the road safer for children.

In November 2016, a truck struck a group of students from Choyo Elementary School in the school zone and injured four.

The city has set up signs and made pavement markings to warn drivers that the road is a school zone. A plan to install traffic signals has been discussed, an official said.

“We have taken measures, but the accident occurred and children’s lives have been lost,” a city education board employee said in disappointment. “I don’t know what to do about my feelings.”

Prime Minister Yoshihide Suga has taken up the issue, too.

He held a Cabinet meeting on June 30 to discuss traffic safety in school zones, urging related ministries and agencies to implement emergency measures.

“We still see no end to these kinds of heart-wrenching accidents,” Suga said. “We will make an exhaustive investigation in the cause of the accident and ensure related business operators will thoroughly implement safety measures.”