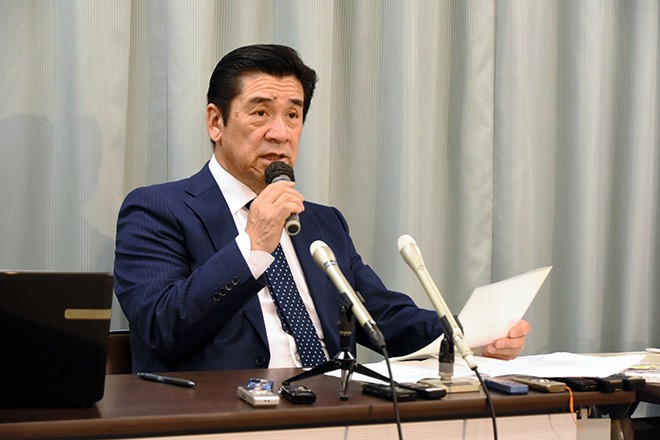 Takahiro Tanaka, head of the secretariat in a recall campaign against Aichi Governor Hideaki Omura, speaks at a news conference at the Aichi prefectural government building on March 30. (Asahi Shimbun file photo)

NAGOYA--Prosecutors indicted two people here on June 29 on charges of forging the names of residents in a petition to recall Aichi Governor Hideaki Omura.

The Nagoya District Public Prosecutors Office indicted Takahiro Tanaka, a former Aichi prefectural assembly member who headed the secretariat in charge of gathering the signatures for the recall, and his second son, Masato, a painter, on charges of violating the Local Autonomy Law.

Prosecutors also indicted Akira Yamaguchi, a former president of an advertising firm in Nagoya, without arresting him for hiring people to fake signatures in Saga at the request of Tanaka.

According to prosecutors, the three are suspected of conspiring to forge signatures by hiring three part-time workers to sign the names of 71 Aichi voters in the capital of Saga Prefecture in late October 2020.

Tanaka, 60, led the forgery, while Masato, 28, carried documents on which signatures were added and oversaw the part-timers’ work, according to sources. Yamaguchi, 38, allegedly recruited the part-timers and made other arrangements via his company’s subcontractor.

Prosecutors have not disclosed whether the three are admitting to the charges.

Tanaka is remaining silent over the allegations, sources said, while Masato is denying any criminal intent, saying he thought it was not a crime because the submission of the signatures was provisional and could be withdrawn at any time. Yamaguchi has admitted to the charges, according to sources.

“I am refraining from commenting at this time,” Yamaguchi said.

Aichi prefectural police are also questioning Takeshi Yamada, 52, a former member of the Tokoname municipal assembly, who admitted that he applied his fingerprint to signatures forged in Saga.

Prosecutors on June 29 released Tanaka’s wife, Naomi, 59, and a 55-year-old accountant at the secretariat who were both arrested on May 19?along with Tanaka and Masato.

“I’m not involved in it as our investigation into the matter shows,” he told reporters on June 29.

He added, “Those responsible must be severely punished based on law and evidence."

The recall attempt, begun in August 2020, was initiated by Katsuya Takasu, a cosmetic surgeon well known for denying the Holocaust and the Nanking Massacre, and others upset at Omura’s handling of the Aichi Triennale 2019 international art festival.

Controversy surrounded the Aichi Triennale even before it opened on Aug. 1, 2019.

Its “After ‘Freedom of Expression?’” exhibit featured a sculpture meant to symbolize "comfort women," who were forced to provide sex to Japanese military personnel before and during World War II.

A video presentation on display showed scenes of burning portraits, including one of Emperor Showa, the posthumous name of Emperor Hirohito, who reigned from 1926 until 1989.

Protests and threats of terrorist acts led to the exhibit’s suspension after just three days.

Takasu set a goal of collecting 1 million signatures for the recall, but the campaign only submitted about 435,000.

In February, the Aichi prefectural election administration commission invalidated about 83 percent of the signed names because they were suspected forgeries. Aichi prefectural police began investigating that same month and seized all the documents containing the suspicious signatures.