VOX POPULI: Pedestrians need better protection from drivers who are out of control

Vox Populi, Vox Dei is a daily column that runs on Page 1 of The Asahi Shimbun. 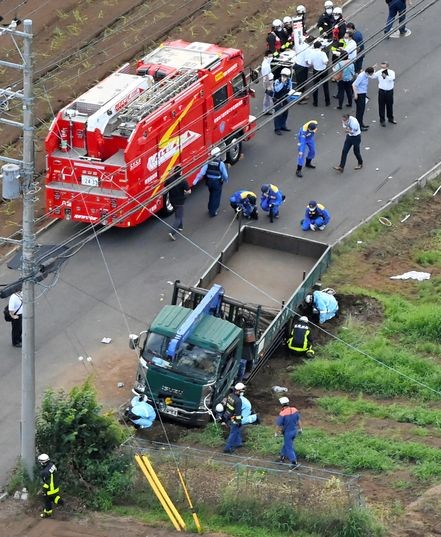 Police officers and others investigate at the scene of a traffic accident that killed two elementary school students and seriously injured three others in Yachimata, Chiba Prefecture, on June 28. (The Asahi Shimbun)

Bunyo Ishikawa, a photojournalist known for his Vietnam War coverage, once traveled the entire length of the Japanese archipelago on foot.

The experience made him acutely aware that Japanese roads "are basically designed primarily for cars, with no consideration for pedestrians.”

In his book "Nihon Judan Toho no Tabi" (Traveling through Japan on foot), he recalled there were sidewalks along city roads, but none along roads that connected cities. He was always on the alert when walking along a roadside path marked only with a white line.

But there was not even a white line at the site of a tragedy that occurred on June 28.

In the city of Yachimata in Chiba Prefecture, a truck rammed into a line of elementary school students walking home from school.

This was the regular commuting route for these youngsters. But not only was the road without a sidewalk or even a guard rail, it also served as a convenient byway for drivers.

With nothing to protect them, two children, aged 8 and 7, were killed.

The driver of the truck was arrested, and alcohol above the legal limit was detected in him.?

He admitted to consuming alcohol on his way back from delivering supplies to Tokyo.

There were reportedly no visible brake marks on the road.

Yet again, drinking turned a vehicle into a lethal machine.

"Have we not become too desensitized by (repeated tragedies)?" wrote Kiyoshi Sato in his account of the loss of his 6-year-old daughter in a 2003 accident caused by a dump truck driver.

His appeal has a grave ring to it.

Yet another lethal accident has irrationally eliminated the future of its young victims. No one must ever sit in the driver's seat without being fully aware of the deadly consequences that could ensue.

But Japan is still appallingly lacking in the means to protect lives from out-of-control cars and drivers.

Vox Populi, Vox Dei is a popular daily column that takes up a wide range of topics, including culture, arts and social trends and developments. Written by veteran Asahi Shimbun writers, the column provides useful perspectives on and insights into contemporary Japan and its culture.