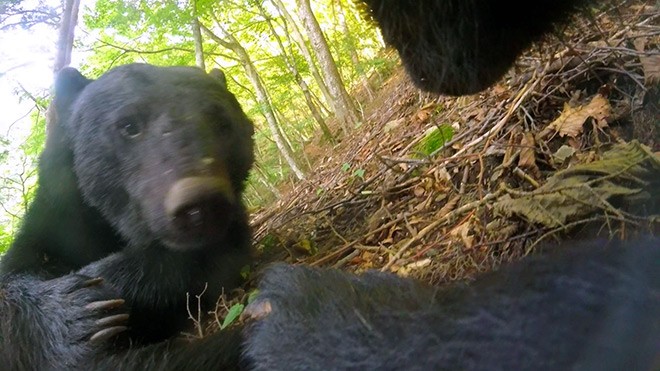 Asian black bears cut down on their feeding time considerably during mating season to give them as much time as possible to engage in reproductive activities, new research shows.

The study involved taking the first video of their breeding behavior in the wild.

“Many mysteries remain as to mating of the Asian black bear although the species live in many parts of Japan,” said Shinsuke Koike, professor of ecology at the Tokyo University of Agriculture and Technology. “But we could collect data on their breeding activities in our recent project. We want to use the data to manage bear populations.”

They recorded the videos of the four adult bears, which were captured in the Kanto region, between May and July 2018.

The cameras were programed to shoot for 10 seconds every 15 minutes during the day.

The collars were arranged to fall off automatically after shooting over a period ranging from 36 days to 45 days, so that scientists could recover the footage for analysis.

Bears usually act alone in the wild, but in mating season, the Asian black bears paired with the opposite sex and interacted from nine to 22 days.?

While they spent more time resting during social days by 1.5 to three times as much, their feeding time would drop by 30 to 60 percent of how long they previously spent on meals before mating.

Video footage also showed that a male bear had mated with multiple females, confirming a polygamous mating system exists among the Asian black bear, according to scientists.

The videos also captured a fight that broke out between two males and a male and female bear that were spending time next to each other.

The researchers also observed a case of infanticide.

The videos showed a male bear feed on a bear cub, a cannibalistic practice commonly observed among other animals, as well.

This is believed to be a male reproductive strategy as a female bear can go into heat and become capable of mating within days after the killing of a cub, which frees the mother from lactation.

The researchers' findings were carried in the online edition of Wiley Online Library at: https://onlinelibrary.wiley.com/doi/10.1002/ece3.7722