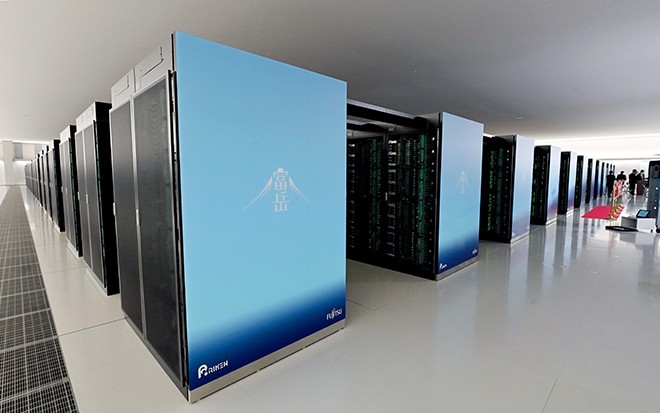 The Fugaku supercomputer in Kobe on March 9 (Yoshinori Mizuno)

The Japanese supercomputer Fugaku remains at the head of the pack after defending its title as the fastest in the world, its third straight time finishing first, following contests in June and November last year.

Aptly named after Mount Fuji, Japan's tallest peak, Fugaku towered above the rest to easily claim the No. 1 spot on the Top 500 supercomputer calculation speed ranking, announced on June 28.

Jointly developed by the Riken research institute and leading computer maker Fujitsu Ltd., Fugaku reached 442 quadrillion calculations per second--roughly three times ahead of the runner-up, a supercomputer made in the United States.

Fugaku placed at the top in four of the categories for the third consecutive time, including for the speed of applications running on it and the ability of big data analytics.

“We want to continue improving its capabilities further,” Satoshi Matsuoka, director of the Riken Center for Computational Science (R-CCS), said in a statement.

Last June, Fugaku became the first Japanese supercomputer in nine years to top the twice-yearly ranking in calculation speed since its predecessor, K. Fugaku has been used to study preventive measures against the novel coronavirus since even before it went into full-scale operation this spring.

The United States and China had also planned to separately enter the Top 500 competition this time with new models boasting performance levels several times higher than Fugaku. But they both failed to do so, apparently due to development delays.

Some 130 billion yen ($1.18 billion) was spent on developing the supercomputer.