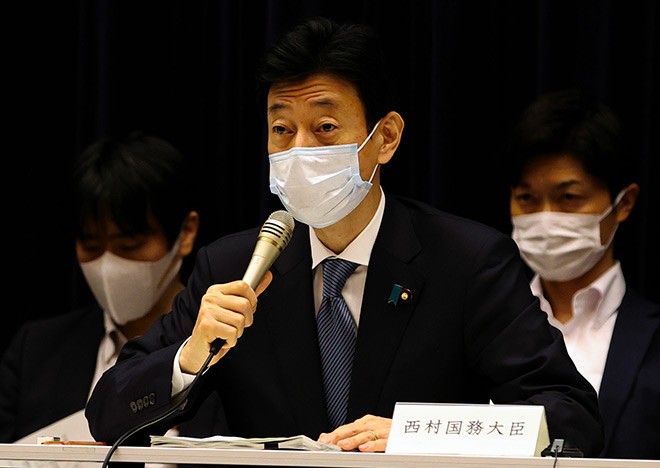 Yasutoshi Nishimura, the state minister of economic revitalization, speaks at a meeting of the government’s expert panel on the COVID-19 pandemic on June 17. (Wataru Sekita)

The government will declare another COVID-19 state of emergency for areas now under pre-emergency measures if needed, the state minister of economic revitalization indicated on June 27 amid a resurgence in infections in Tokyo.

"The number of new infections in the capital and other areas in the greater Tokyo metropolitan area is clearly trending upward,” Yasutoshi Nishimura, who is also in charge of the government’s novel coronavirus measures, said during a program aired by Japan Broadcasting Corp. (NHK) that day.

Tokyo reported 534 new COVID-19 cases on June 26, the seventh consecutive day its daily tally topped that of the week before. Tokyo is now covered by pre-emergency measures after the central government lifted an emergency declaration for the metropolis on June 20.

“We should not hesitate to issue a state of emergency for areas under pre-emergency measures if necessary,” Nishimura said.

Following the lifting of the emergency declaration, the Tokyo metropolitan government began allowing bars and restaurants to serve alcohol if they meet certain conditions.

But Nishimura hinted at another ban on serving alcohol, saying the government needs to consider taking stronger anti-virus measures.

Health minister Norihisa Tamura made a similar remark about the possibility of another state of emergency at a news conference on June 25, saying,?“It’s certainly an option if there are signs of a resurgence in infections."