Crowds in various parts of Japan on June 26, the first weekend for Tokyo and eight prefectures to be partially freed from a weeks-long state of emergency. (The Asahi Shimbun) 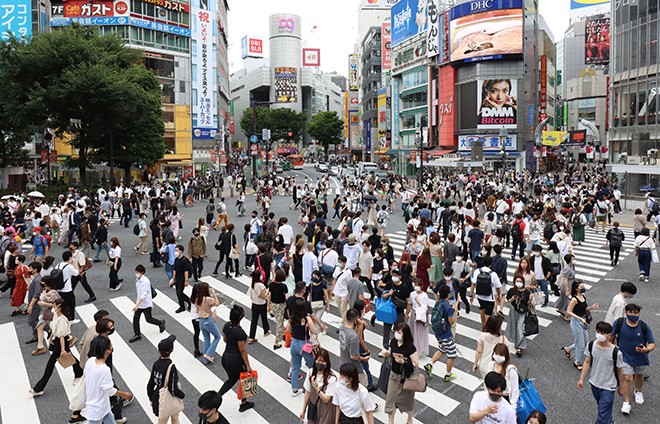 Pedestrians at Shibuya's Scramble Crossing in Tokyo soon after lunchtime on June 26, the first weekend precautionary measures against the novel coronavirus were partially eased. (Shiro Nishihata)

City dwellers celebrated their first weekend in weeks of not living under a full state of emergency by hitting the streets, eating and drinking out and shopping where they pleased, things they used to take for granted.

Streets in Tokyo, Osaka and other large cities were buzzing with crowds June 26 following the partial lifting of curbs in the capital and eight prefectures.

Despite the seemingly relaxed atmosphere, eased precautionary restrictions remain in place for most of the prefectures.

Still, for most people it was a chance to finally let their guard down, albeit slightly perhaps as just about everybody dons a face mask before venturing out.

Social distancing must still be observed, which means fewer seats, tables and customers at bars, restaurants and elsewhere.

Tokyo was placed under an initial 17-day?state of emergency, the third to be imposed, on April 25. It was supposed to end May 11 but then extended, first to May 31 and later to June 20. Other prefectures faced similar curbs.

Health experts have voiced extreme concern about people being able to mingle more freely again in public in the?leadup to the Tokyo Olympics next month and growing signs that COVID-19 cases are rising in the Tokyo metropolitan area, along with the presence of more contagious coronavirus variants.

But judging by the crowds of pedestrians at the iconic Scramble Crossing at 1:30 p.m. outside Tokyo's?Shibuya Station, some even spilling into the road, people are fed up with repeated warnings about safety and simply wanted to have a good time.

Benches set up around the nearby world-renowned Hachiko dog statue, a popular meeting spot for couples, were all occupied.

A?salesclerk at a clothing shop near the packed crossing was not impressed by the return of large crowds, however.

“People seem to be letting down their guard,” she said. “I am really worried about a big increase in new cases.”

And so, she should be.

The latest weekly figure for COVID-19 cases in Tokyo already points to a rebound. Tokyo recorded 534 new cases on June 26, 146 more than a week earlier, according to the metropolitan government. The daily average of new cases over the week through June 26 marked an increase of 26 percent from the preceding week.

An estimate of pedestrian flow, gleaned from locations of NTT Docomo Inc. mobile phone users, showed a sharp uptick at nine?sites surveyed across the nation on June 26, compared with a week earlier.

Between 9 a.m. and 5 p.m. that day, 48 percent more people congregated in front of JR Osaka Station, far larger than at other sites surveyed.

Okinawa, the only prefecture still under a state of emergency, also saw an uptick in pedestrian traffic at 6 percent in Kokusaidori, the main street in the prefectural capital of Naha.