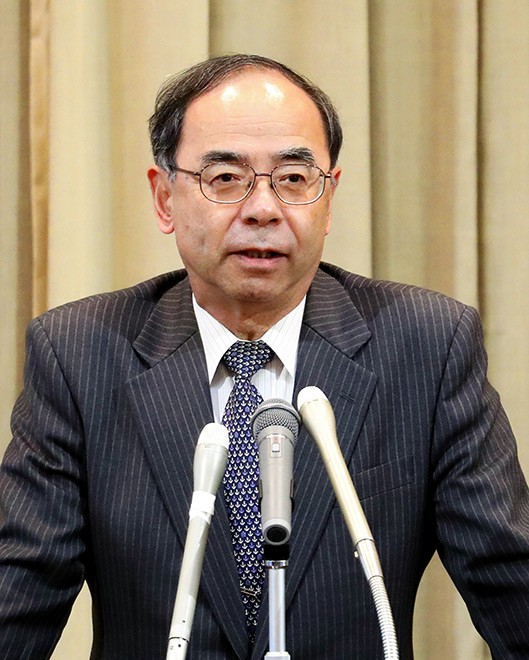 Yasuhiko Nishimura, the head of the Imperial Household Agency, in 2019 (pool)

Shock waves are reverberating over concerns attributed to Emperor Naruhito by his key aide about the wisdom of the government’s decision to host the Tokyo Olympics in July while the novel coronavirus pandemic is raging.

The issue goes to the heart of the role the emperor plays in postwar Japan. As the symbol of the state, the emperor, like monarchs everywhere, has only a limited role, such as attending important ceremonial functions. It is strictly taboo for the emperor to comment publicly on government policy.

But Yasuhiko Nishimura, grand steward of the Imperial Household Agency, stirred up a hornet’s nest by inferring at a June 24 news conference that?Naruhito is deeply concerned about holding the Olympics while Japan continues to battle the pandemic.

As the?top bureaucratic official in the agency, Nishimura has a privileged position in that he is the only individual who meets regularly with Naruhito, 61, to exchange views?on topics of the day.

“From what I gather, the emperor is concerned about holding the Tokyo Olympic and Paralympic Games, for which he serves as honorary president, while people are voicing anxiety over whether it will lead to a spread of infections,” Nishimura said at the news conference.

Although Nishimura made a point of saying the emperor never used those precise words, it was clear that he was trying to convey Naruhito’s feelings on the issue to the public at large.

Nishimura’s remark set off a firestorm.

Others in the government were aghast that Nishimura even inferred what the emperor might be thinking about the Olympics as it could affect preparations to hold the Games that kick off July 23.

“The feelings of the emperor should not be spoken about in the open by ‘inferring’ things,” said a high-ranking official in the prime minister’s office.

“It took me by surprise, too. I want to know how that comment came about,” said another Suga associate.

Hideya Kawanishi, an associate professor of history at Nagoya University,?said Nishimura’s comment should be taken as simply an expression of the emperor’s concern for the well-being of the public.

“The emperor has always wanted to be on the side of the general public as they suffer through the pandemic, so there had to be the need for an opportunity to express his concerns” on the issue, Kawanishi said.

In the past, Imperial Household Agency officials have voiced their impressions of what members of the imperial family feel about certain issues.

Retired agency officials said there have been instances of high-ranking members indirectly transmitting the views of the emperor and others in the imperial family regarding topics of wide interest to the public.

But even in those cases, agency officials never clearly stated whether the comment was simply their own surmise or if it truly represented the view of an imperial family member.

That ambiguity goes a long way to explaining the current hubbub.

According to household agency sources, Naruhito is very concerned about recent surges in infection rates and has?held online meetings with medical care professionals to thank them for their efforts.

He also made use of a video conferencing system to hold the New Year Poetry Reading ceremony that was postponed until late March due to the pandemic and social distancing protocols.

While Suga deftly sidestepped reporters’ questions,?Seiko Hashimoto, the head of the Tokyo Olympic organizing committee and a former Olympian herself, seemed stuck for a comment during her June 25 news conference.

Avoiding a direct response, she simply said that every effort would be made to eliminate any concerns the public may have about a spread of infections during the Olympics.

Government officials were also puzzled by Nishimura’s comment because he was considered close to the administration.

At the time of Nishimura’s appointment, it was suggested that he got the position so the?prime minister’s office could exert more influence over the agency.

Another matter?that is fueling current speculation is that Suga met with Naruhito on June 22 for a periodic chat held by the prime minister to explain government policy on various issues.

While the contents of those meetings are never divulged, some people in the prime minister’s office suggested the issue of the Olympics must have been raised.

Opposition lawmakers also sought to score political mileage from the furor by saying?Nishimura’s inference crossed the bounds of the Constitution, which stipulates the emperor has no political authority.

(This article was written by Junichiro Ishii, Tatsuro Sugiura and Daisuke Maeda.)