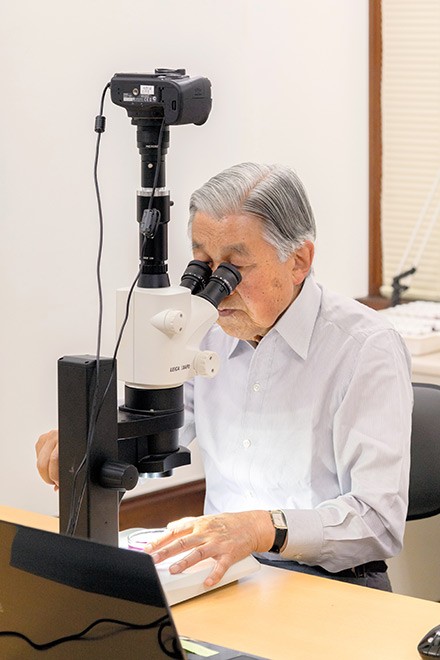 Emperor Emeritus Akihito observes a specimen of a goby species with a microscope at the Biological Laboratory on the grounds of the Imperial Palace in Tokyo in July 2018. (Provided by the Imperial Household Agency)

It marks his first discoveries of new types of fish since 2003 and his first since abdicating the throne.

Akihito has long pursued scientific research on gobies as his life’s work.

The latest discovery brings the total number of new goby species he has discovered to 10.

The agency said his study was published on May 20 in the online version of Ichthyological Research, a quarterly English journal of the Ichthyological Society of Japan. It is titled, “Descriptions of two new species of Callogobius (Gobiidae) found in Japan.”?

Akihito found the species among the fish he caught on Zamamijima and Iriomotejima islands in Okinawa Prefecture between 2001 and 2008, and began studying them around 2017, according to the agency.

Akihito moved to his current residence in Tokyo’s Minato Ward in March 2020, following his abdication a year earlier. He still regularly visits the Biological Laboratory on the Imperial Palace grounds in the capital to continue his studies on gobies.