Warplane salvaged from sea in search for human remains 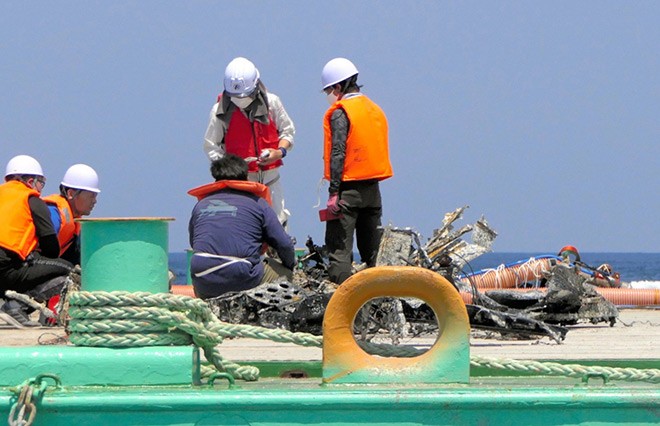 Part of the wreckage of a sunken aircraft believed to have been used by the Imperial Japanese Navy is dug out of the sea off Tanegashima island in Kagoshima Prefecture on June 23. (The Asahi Shimbun)

NISHINOOMOTE, Kagoshima Prefecture--Part of the wreckage of what is believed to be a Japanese warplane saw the light of day after more than 75 years as it was pulled from the waters off an island here on June 23.?

A team including officials from the welfare ministry, which is in charge of collecting the remains of Japan's war dead, is searching for the remains of the crew and their personal belongings among the wreck.

“When I saw the salvaged wreckage, I thought it must have been a painful experience for (the pilot),” said Fumiaki Nayuki, who heads the team. “We want to carry the search through to the end.”

The team plans to continue its search on June 24.

According to the ministry, this is the first time that the mission involves the salvage of a sunken aircraft likely used by the Imperial Japanese Navy.

The wreckage was found at a depth of about 20 meters, located roughly 300 meters off Cape Kishigasaki at the northern tip of Tanegashima island.

Tides are strong at the site. The ministry chose this time of year to start the search because the waters are relatively calm. The team has been exploring the site and preparing for retrieving the crew's remains from the wreck since June 15.

On June 23, divers wrapped a rope around the plane wreckage and tried to hoist it up by crane, but the work did not go smoothly as the wreck is corroded. They dug out about 60 percent of the wreckage, including parts of the engine and the landing gear from the front of the cockpit.

The team will move the salvaged parts to a pontoon boat to examine them for the remains of the crew and their belongings.

The aircraft appears to be a Type 97 carrier-based attack bomber used by the Imperial Japanese Navy, according to the Japan Association for Recovery and Repatriation of War Casualties, which is commissioned by the ministry to conduct the search, and other sources.

The entire wreckage was buried upside down in the sand with half of the wings lost. The wreck measured 8.8 meters long and 7.3 meters wide. Divers dug out sand from the cockpit by hand.

Tetsuro Hayashi, 74, who runs a dive shop in Nishinoomote, discovered the wreckage in 2015 after learning from local fishermen that an aircraft was likely resting at the site.

He has since been involved in search efforts to return any crew remains found to the bereaved families as soon as possible.

The Type 97 aircraft is believed to have been used in kamikaze attacks during the waning days of the Pacific War.

The three-seater attack planes are believed to have made sorties from the Kushira naval air base in today’s Kanoya, Kagoshima Prefecture, to stage suicide attacks on U.S. ships off Okinawa.