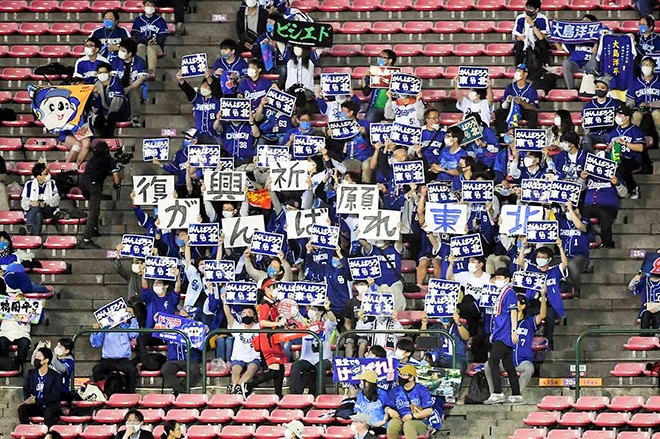 Chunichi Dragons fans put up blue “Keep it up, Tohoku” signs in the top of the seventh inning during a game against the Rakuten Eagles at Rakuten Seimei Park Miyagi in Sendai on June 10. (Provided by the Tohoku Rakuten Golden Eagles baseball team)

SENDAI--The loudest and longest cheers at the home stadium of the Rakuten Eagles here were not for a home run nor a spectacular defensive play, but for signs displayed by the opposing team’s fans.

The signs read, “Keep it up, Tohoku,” and were intended to extend encouragement well beyond the baselines of Rakuten Seimei Park Miyagi in the capital of Miyagi Prefecture.

The signs appeared in the top of the seventh inning in each of the three games of an interleague series from June 8 through 10 between the Eagles of the Pacific League and the Nagoya-based Chunichi Dragons of the Central League.

At the top of the “lucky” seventh inning, Dragons fans sang a team song to pump up the Chunichi batters. During the chant, around 50 of the signs simultaneously appeared in the stadium’s right-field seats where the visiting team’s fans congregate.

The signboards were messages of good wishes for the northeastern Tohoku region’s rebuilding efforts from the Great East Japan Earthquake and tsunami that struck 10 years ago.

When the scene was shown on the stadium’s video board, a long applause erupted from the crowd in the ballpark, including from Eagles fans.

The scene was shown on TV relay broadcasts, and it went viral on social media.

“I was moved so much,” one poster wrote.

Another said, “I was on the verge of tears.”

The Rakuten team distributed the signs free of charge to home stadium visitors during interleague play in 2011, the year of the March 11 quake and tsunami.

The front sides of the signs were crimson red, Rakuten’s team color, but their backs were available in different colors representing each of the six teams of the Central League.

Chunichi fans took home some of the blue-sided signs and have since displayed them when the Dragons play the Eagles in interleague games, which are typically held from May through June, in preseason games played around the anniversaries of the disaster, and on other occasions.

Chunichi was Rakuten’s first opponent in the preseason following the 3/11 disaster.

Eisuke Kitao, a resident of Nagoya, has kept some of the signboards at his home for 10 years. He said he collected around 150 of them from the stands after interleague play ended in 2011, and he began pursuing ways to continue using them.

“I keep them in a bag made of thick fabric so they will not be bent,” Kitao said. “I have no personal connection whatsoever with the Tohoku region, but I thought a lot of things at that time.”

While some fans have individually displayed the signs, a group of volunteers, including Kitao, acquired the habit of putting up theirs collectively around 2014, he explained.

He entrusted another Chunichi fan, Mayumi Kojima, with the signs for distribution to others before the interleague series in Rakuten Seimei Park this year under prior permission from the Rakuten team.

Kojima noted the significance of the three-game series.

“The interleague games were held in Sendai for the first time in three years,” she said. “I definitely wanted to show off the signs this year, partly because it marks the 10-year anniversary of the disaster.”

Kojima said she was a big fan of Senichi Hoshino, a former player for the Dragons who later served as manager for Chunichi and other teams, including the Japan Series-winning Eagles in 2013. He died in 2018.

Rakuten also became one of her favorite teams after Teppei Tsuchiya, currently a Rakuten coach, was traded as an outfielder from the Dragons to the Eagles.

During the three games, the Dragons fans put up only about 50 signs because the crowd size was restricted to prevent novel coronavirus infections.

Kojima said she displayed her own sign with her best words of encouragement for Tohoku.

After the final out in the games, many Rakuten fans entered the Chunichi fan section to give their thanks for the gesture. Some were almost in tears, Kojima said.

Kitao watched the games at his home.

“The signs probably drew so much attention because this year falls on the landmark 10th anniversary of the disaster,” Kitao said of the reaction. “Be that as it may, I was moved by the way the Rakuten team posted a message on the stadium’s video board to say, ‘Thank you, Chunichi fans.’ What a wonderful team it is, I said to myself.”

Kojima said she is quite fond of the Tohoku region, which she has visited on a number of occasions. She said she has been to disaster-hit communities after 2011 quake and tsunami.

“I almost felt embarrassed by the applause we got from the entire stadium,” she said. “I was so impressed to realize the warmth and kindness of the Tohoku people.”