Japan’s only shortwave station still in business after 80 years 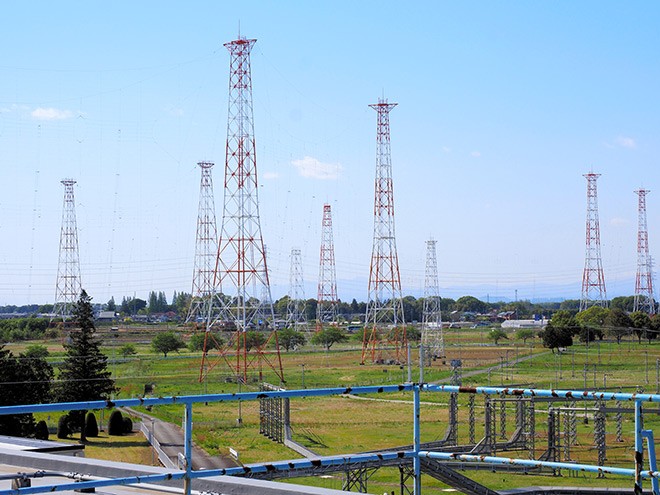 A forest of steel towers at KDDI Corp.’s Yamata Transmitting Station seen from atop the main building in Koga, Ibaraki Prefecture, on April 26. The highest tower stands 70 meters. (Morikazu Kogen)

KOGA, Ibaraki Prefecture--Standing tall and proud over an area of 1 million square meters or so, a forest of steel towers in two-tone red and white is the dominant feature under the blue sky against the backdrop of Mount Tsukubasan.

Shortwave radios were the primary means for people across the world to receive audio content from Japan without a large-scale facility before satellites and submarine cables came into existence.

The 1945 announcement of Japan’s surrender by Emperor Hirohito was transmitted from here to military personnel on overseas battlefronts.

When it was completed in 1940, Yamata, now part of Koga, was a typical farming village with a population of 4,536, of whom 90 percent were farmers, according to a 1941 local history pamphlet.

“A large area of flatland was available, and it was less prone to damage from snow and typhoons,” said Kazuhiro Matsui, 50, a senior official in charge of infrastructure, who served as a guide when the station was shown to media representatives in April. “I think it was the only place fit for the station in the country.”

The steel towers are arranged in such a way that 18 transmission antennas cover 360 degrees to send broadcasts as far north as Boston and London and as far west as Seoul and Nairobi.

The seven transmitters are installed with vacuum tubes, which have been used to amplify radio waves since the station started operations. Each tube weighs about 70 kilograms, according to Matsui.

The control room monitors the transmitters and other broadcasting facilities around the clock, and workers switch from one antenna to another at each broadcast time to ensure the facilities are working properly.

Shortwaves refer to a range of radio signals from 3 to 30 MHz. The signals reach far corners of the globe because they bounce back and forth between the Earth’s surface and the ionosphere that envelopes the planet at a height of several hundred kilometers.

Japan’s propaganda broadcasts to its colonies, as well as “The Zero Hour,” an English-language radio program aimed at demoralizing U.S. troops in the South Pacific, were broadcast from here.

According to Matsui and other sources, women were mobilized from surrounding areas and put in charge of radio transmission, maintenance and other services because engineers at the station were pressed into military service to work as communications officers.

“I heard that those who worked at the station during the war came back to see cherry blossoms for old times’ sake,” Matsui said.

Despite the advent of satellite and internet broadcasting, shortwave radios still have an important role to play.

Shortwave radios served as a source of information during the Persian Gulf War in 1990 for Japanese people stranded in the Middle East.

“Shortwaves can reach any location under any circumstances, and you don’t need extensive equipment to receive them,” Matsui said. “Their importance remains unchanged.”