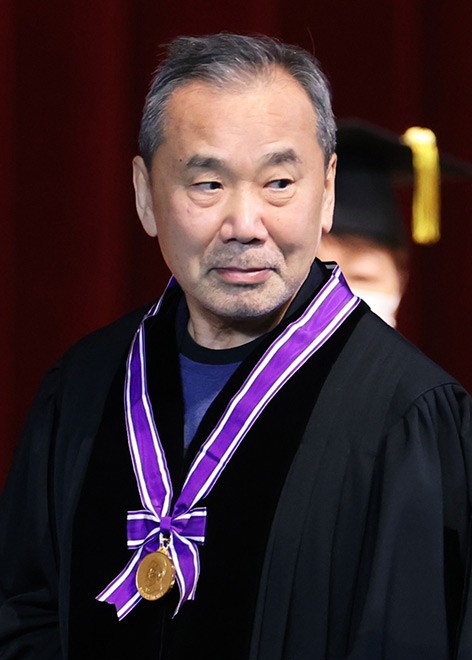 Haruki Murakami receives an award for his distinguished achievements in the arts from Waseda University during an entrance ceremony in Tokyo’s Shinjuku Ward on April 1. (Toshiyuki Hayashi)

Acclaimed novelist Haruki Murakami donned cap and gown to share his thoughts on the power of stories and offer encouragement to aspiring writers enrolled at his alma mater, Waseda University.

Murakami on April 1 gave a congratulatory speech to new students at Waseda University’s School of Humanities and Social Sciences and School of Culture, Media and Society at their entrance ceremony.

Murakami, 72, graduated from the university’s former School of Humanities in 1975. During his seven years of college life, he opened the Peter Cat jazz cafe in Kokubunji, western Tokyo.

“I ended up getting married and starting my career before graduating from the university,” he told the freshmen. “I won’t recommend you do the same, but it will all work out in the end.”

Murakami also touched on what roles stories can play in society.

“Stories are one of the things that can help you explore uncharted territory called the mind,” he said. “Novels play an integral role in developing a healthy society because society itself has a mind.”

Murakami ended his speech by expressing hope that some in the audience would follow in his footsteps and become novelists.

“The job of novelists has been passed down from one person to another like a torch,” he said. “I’ll be very glad if some of you carry that torch.”

The Haruki Murakami Library, formally known as the Waseda International House of Literature, was initially scheduled to open this month at the university, but the opening was postponed until October due to the COVID-19 pandemic. The facility will house Murakami's handwritten manuscripts and materials for his novels as well as his collection of nearly 20,000 vinyl records.

It was also announced on April 1 that Robert Campbell, a researcher of Japanese literature who became a specially appointed professor at the university the same day, will serve as an adviser to the Haruki Murakami Library.

After his speech, Murakami received an award for his distinguished achievements in the arts from the university's president, Aiji Tanaka.