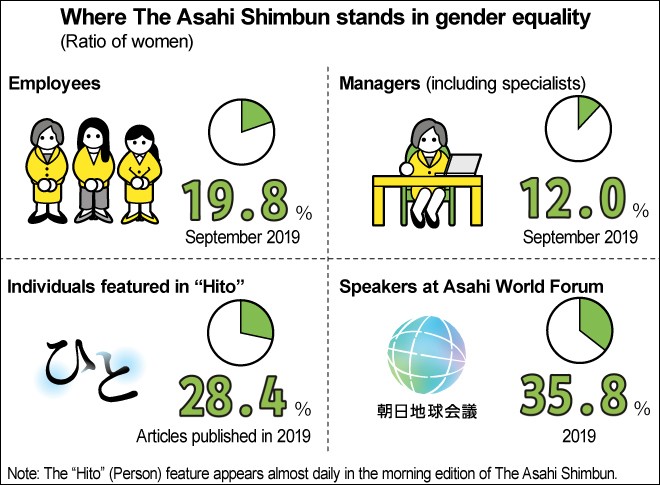 The Asahi Shimbun on April 1 announced its Gender Equality Declaration, seeking to become a media leader for the empowerment of women through its reporting and business operations.

The company also aims to achieve gender equality among the ranks of its employees, who are responsible for those operations.

Gender refers to sexual differences created socially and culturally and covers the social framework and awareness of a division of roles based on sex.

The gender difference in Japan is of a scale unseen in other advanced nations. As a media company that has expressed its support for the Sustainable Development Goals, which all members of the United Nations will seek to achieve by 2030, the Asahi will implement specific measures toward one of those goals—to achieve gender equality and empower all women and girls.

As an initial indicator to measure the degree to which the Asahi is moving to meet the gender equality goal it will focus on the “Hito” (Person) feature found in the morning edition as well as the Asahi World Forum, an international symposium sponsored by the Asahi.

All members of the United Nations have pledged to meet the Sustainable Development Goals by 2030. In striving toward one of the 17 goals, “to achieve gender equality and empower all women and girls,” we hereby announce the Asahi Shimbun Gender Equality Declaration and will work toward that goal.

1. We will place importance on diversity in the pages of The Asahi Shimbun as well as the contents transmitted through The Asahi Shimbun Digital website. When choosing who to interview and which experts to ask for their views, we will make every effort to avoid a gender bias. One indicator will be the “Hito” (Person) feature that appears almost daily in the morning edition of The Asahi Shimbun. We will strive to ensure that over the course of a year the ratio of either men or women appearing in the feature does not fall under 40 percent.

2. Beginning with the Asahi World Forum, an international symposium sponsored by The Asahi Shimbun, we will strive to ensure that the ratio of either men or women asked to speak at major symposiums sponsored by the company does not fall under 40 percent. While seeking the understanding of those involved, we have set this goal as one way to allow for discussions from a variety of perspectives.

3. The Asahi Shimbun will seek to at least double the number of women in managerial positions, who currently hold about 12 percent of such posts. We will also seek to improve the ratio of male employees who take paternity leave. We will also review the work style of all employees and make efforts to foster personnel so that everyone, regardless of gender, can be active workers while also caring for their children and aged relatives.

4. We will hold periodic in-house training and study sessions related to gender equality so that such awareness can be reflected in our reporting and business operations.

5. We will periodically publish booklets compiling our articles related to gender equality in order to have such publications widely used in an educational setting or by other companies.

6. We will periodically assess the degree to which the contents of this declaration are being met and what measures have been taken and release the results of that assessment.

Through the Asahi Shimbun Gender Equality Declaration announced on April 1, The Asahi Shimbun will make various efforts while keeping in mind the importance of gender equality in its reporting and business operations as well as seek gender balance in its organization. With the gender gap in Japan very large based on an international comparison, the Asahi will make an effort to provide our readers with a variety of opinions and perspectives in order to serve as a catalyst for a fundamental review of the value sets and work styles of the public.

Japan continues to rank low in the annual gender gap rankings released by the World Economic Forum. In 2019, it ranked 121st out of 153 nations, its lowest rank ever. The ratio of Lower House members who are women is 10 percent or so. The ratio of female executives at listed companies is around 5 percent. Not only is there an extremely small presence of women in the decision-making ranks, but there is also a wide range of other areas where the gender gap is prevalent, including the preponderant amount of time women spend on household chores and child rearing.

The Asahi Shimbun has until now continued to cover stories with the aim of improving the status of women. Since 2017, it has published a special feature, “Dear Girls,” as a runup to International Women’s Day, which falls on March 8. The series is designed to have readers think about the gender gap.

Regarding the terms used in Asahi articles, the company in 2017 revised its Gender Guidebook that was compiled in 2002. A major aim of that revision was to consider whether articles, photos and headlines were fomenting gender stereotypes and to think of more balanced expressions for use in the articles.

There has also been a growing movement in various sectors to seek a 50:50 ratio between men and women. For example, in the media sector, Britain’s public broadcaster, BBC, has started a project to bring about equality in terms of those appearing on its programs. The New York Times in the United States has established a post of “gender editor” to check on the paper’s reporting.

As Asahi reporters have covered various topics related to the gender issue, there has been an increase in opportunities to think about what their articles say as well as the company structure. Such reporters have raised their voices, and a “women’s project” team, which carries out activities across departments and sections, played a key role in hearing the views of those working there. That led to the declaration.

In order to avoid a bias toward men that leads to their greater prevalence in articles and company-sponsored symposiums, we will make even further efforts to find women who have advanced specialized knowledge as well as their own perspectives. The ratio of female managers at Asahi is currently 12 percent, but since we cannot set a numerical goal detached from the current number of female employees, our goal for 2030 is to at least double the ratio of female managers.

In order to make the declaration and Asahi’s measures viable, we have set a target of not having the ratio of either men or women appearing in the “Hito” (Person) feature as well as speakers at the Asahi World Forum fall below 40 percent. We will report to our readers on what the ratio for women is for both instances. Over the course of 2019, women who were written about in the “Hito” feature made up only 28.4 percent of the total. The ratio of female speakers at the Asahi World Forum for 2019 was 35.8 percent, with 24 of the 67 speakers being women.

Some concerns were raised by employees about whether setting numerical goals would restrict Asahi’s articles and business operations, but we have decided to take gender balance into greater consideration while continuing with efforts to improve quality.

In his speech to new company employees at a ceremony also held on April 1, Masataka Watanabe, Asahi president and CEO, said: “Our ideal is to create a society where varied value sets are respected by others and in which everyone can play an active role regardless of gender, disability and differences in nationality, ethnicity or religion. Today’s declaration is one attempt to work from close at home toward that ideal.”