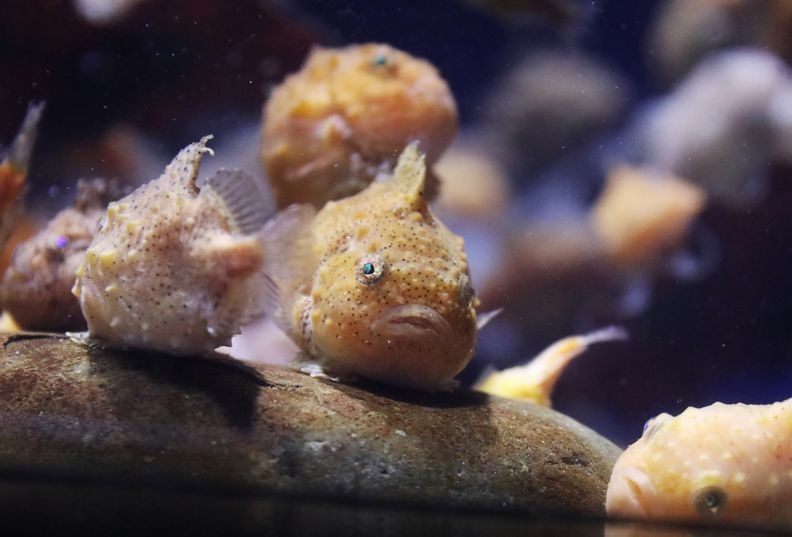 Editor's note: This is part of a series of videos offering an up-close perspective on the animal kingdom. A special 360-degree video camera system was set up in zoos and other facilities to show how the animals view their world as they interact.

Also visit our special 360-DEGREE LIVES page (http://t.asahi.com/360lives), where you can watch all the previous videos.

With their round bodies and bulging eyes, the balloon lumpfish are often referred to as “idols of the sea in the north” as they inhabit the Sea of Japan, the Sea of Okhotsk and similar frigid environments.

With the help of the Enoshima Aquarium in Fujisawa, Kanagawa Prefecture, a 360-degree camera was planted in a tank where the water temperature is maintained at about 6 degrees.

The aquarium won renown for breeding the fish over three generations.

Balloon lumpfish belong to the Cyclopteridae family and grow to more than 10 centimeters in length. The fish cling to seaweed, rocks and other hard surfaces, and rarely move. Their body color ranges from orange to yellow, brown, red or white.

Particularly eye-catching at the exhibition area are yellow-colored baby fish in a small tank. They measured about 5 millimeters at birth last summer but now are about 2 cm long.

With their mouths agape and shoe-button eyes wobbling, the infant fish entertain visitors as they often appear to meet the gaze of the spectators.

“When you feed them, they start swimming as if balloons are released into the air,” said aquarium curator Makoto Sugimura.

Although they are poor swimmers, things drastically change in the peaceful tank when krill are sprinkled. The balloon lumpsuckers “take off” all at once, Sugimura said.

Because the fish have such powerful suction cup-like pelvic fins, it is almost impossible to remove them from the surface of the tank or buckets once they are attached, which makes it difficult for aquarium staff to move the exhibition tank, he added.

Balloon lumpfish are carnivorous and prey on shellfish and soft-bodied creatures. The males attach themselves to large shells and other confined spaces to create spawning beds for the females to lay eggs. The males will protect the eggs until they hatch.